In 1966, Versatile was the first company to mass-produce articulated four-wheel drive tractors. Five decades later Versatile tractors are known around the world for reliability, durability and ease of service and maintenance. The modern era of Versatile tractors upholds the reputation of longevity while maximizing functionality and operator convenience. Pairing the industry renowned engine and transmission combination with the proven outboard planetary system and largest cab in the segment has created one of the best tractors in the field today.

Versatile is marking the 50th Anniversary with a run of 50 Legendary Limited Edition tractors, which were made available for sale and sold-out in early 2016. The Legendary Limited Edition features historic red and yellow paint and special decals. These tractors with serial numbers V5001 to V5050, also a custom-logoed leather seat and a plaque denoting the farm name, selling dealer and date.

The most famous Versatile tractor in history was returned to the factory at 1260 Clarence Avenue in Winnipeg for a full restoration. The Versatile 1080, more commonly known as “Big Roy” received mechanical repairs, new components, new cab interior and a fresh coat of paint and new decals. The Versatile 1080 has a 19-liter Cummins engine with 600 horsepower and was mounted to the back half of the tractor to power the machine, inverting the traditional fourwheeln drive layout. The 550 gallon (2100 litre) fuel tank is located at the front of the tractor. The 6-speed manual transmission could achieve speeds of 13.2 MPH (21.2 KPH). Big Roy featured cutting edge technology for that era and an operator environment that was ahead of its time. The air conditioned cab, accessed through a sliding door, was built with seating for three full sized adults. The engine compartment virtually eliminated rearward visibility and the solution was a closed circuit television system with a 9″ monitor in the cab connected to a dustproof 120 degree camera in the rear.

The 50th Anniversary will wrap up with the annual Versatile Dealer Meeting, this year held at the factory in Winnipeg, MB, where it all began more than five decades ago. 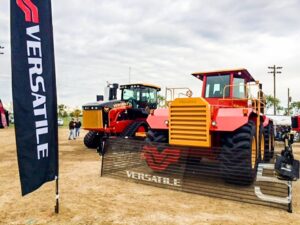